Why Solar Powered Energy Is Better Than Fossil Fuels

Are Fossil Fuels Our Friend? 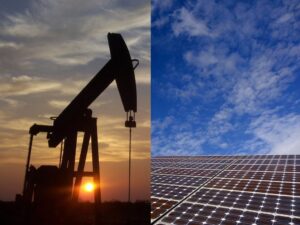 Fossil fuel has been around for millions of years. They have been used for powering countless things such as our household, businesses, manufacturing, and our cars to name a few. Our dependency has dated far back in time and continues even till today despite growing resources of alternative energy.

The primary sources of fossil fuel energy include coal, petroleum, and natural gas. Their combined energy usage totaled a whopping 86.4% according to 2007 EIA statistics.

Every time we are able to drill new areas flourishing with fossil fuel, most of the world rejoices. Being able to find new resources underneath our crust is like digging a gold mine; however, this particular mine doesn’t come without its problems and negative impacts.

Mankind has reaped its benefits in more ways than they should and pretty soon reserves will eventually deplete, but the problem doesn’t just stop at depletion concerns.

Most of the world, particularly in developed countries such as the United States, have been blessed with abundance and have taken for granted what they have. For instance, many of us have left our heaters, air conditioners, television sets, computers and lights on for more hours than we should or need.

Sadly, I have certainly been guilty of all of the above as well.

Because everything is so readily available at the tip of our fingers we tend to not step back to look at the bigger picture surrounding our usage.

What are the environmental problems posed by fossil fuels?

Fossil fuels = Pollution. That is a fact that we are all aware of.

Unlike solar powered energy, fossil fuels are non-renewable resources. Not only do they take years to form, but the rate of use is far greater than the rate of formation.

In addition to being non-renewable, fossil fuels also produce around 21.3 billion tons of CO2 each year. According to scientists and environmentalists, CO2 is our global warming contributor that causes the average surface temperature of the Earth to rise.

With the strange climatic changes in the last couple of years, I wouldn’t doubt that our growing pollution has some sort of effect on the weather and the apparent shift in seasons.

Pretty much no rain in December in California and full of sunshine? It’s nice, but a little unnerving.

Why solar powered energy is rising above fossil fuels.

In only one hour, the amount of energy that shines on the Earth equates to the amount used by the world’s population in an entire year. Mankind has developed a way to utilize the sun’s vast energy by converting its sunlight into electricity via photovoltaics and other solar power methods.

The fossil fuels in the form of plants underneath the earth which transform into oil over time are drilled using polluting machinery. To further refine the oil, more machinery is needed. This polluting cycle is continuous, yet fossil fuel abundance is not.

Although manufacturing solar panels utilize fossil fuels, the overall gain is greater than using fossil fuels alone because less is needed and all other powering thereafter is done by capturing the sun’s energy.

In fact, with long-term calculations due to current falling PV prices and great innovations, the beneficial gain for everyone’s pockets from solar energy use will greatly outweigh the cost of fossil fuels over a considerably short amount of time.

The winner in this case is pretty clear. Going solar is more beneficial in the long run.