Mobile Phone- Novelty or Necessity? How About Your Energy?

IN 1973, New Yorkers stopped and stared in amazement as Dr. Martin Cooper demonstrated the first cellular telephone call, right on the city street. The invention and combination of the radio, battery, and micro-processor had launched the mobile phone era. It takes a lot to make a New Yorker stop and stare. Mobile phones don’t make people stop and stare anymore. They do make people crash their cars, but that’s a different crusade. 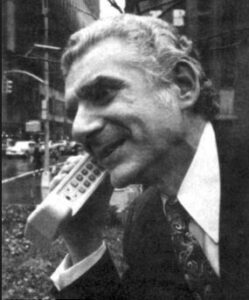 Mobile phone technology is no less impressive today than it ever was. Moreover, it has become indispensable, despite the fact that we take it almost entirely for granted. Smart phones went from novelty to luxury to necessity in less than 20 years while we barely paused to notice.

Coincidence has it that also in 1973, the first residential solar panels in the United States were installed…in Delaware, and began producing energy without the aid of a utility company. Novelty, then luxury, and finally necessity, is the natural progression here, too. And while it’s true that a residential solar system may not come with a data plan, it is just as true that the comfort you enjoy, the money you save, and the environmental dent you don’t make is data that enables you to make some plans of your own. Solar energy can make you more mobile. Phone!  -Lee Stilwater