What is Net Metering? Don’t Put All Your Eggs in One Basket

The Nems = Net Energy Metering, an arrangement whereby the utility company buys the extra electricity your solar system produces at retail, and sells it back to you at wholesale.

Once upon the new millennium there was a farmer couple named Jen and Jem Nems. The Nems had a dozen hens. They each produced an egg a day. The Nems enjoyed omelettes, soufflés, pies, cookies, and all the goodies they could eat, because they always had more than enough eggs. They gave some away to the neighbors, shared with the poor, and donated to their kids’ school. Still there were leftovers. The hens were productive, content, and needed very little attention.

The Nems had a neighbor named Bill that was a PiGeE farmer, but he moved to the city and became a great merchant. Everyone called him Big Bill. Big Bill noticed that people in the city didn’t have enough eggs. So every day he paid top dollar & bought up all the Nems’ extra eggs. He didn’t mind paying a high price, because he could still double or even triple it in town and make a big profit. No one seemed to care. 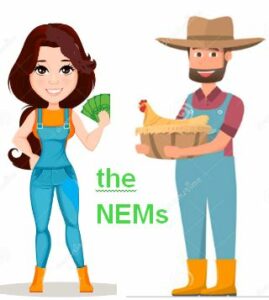 A few townsfolk said Big Bill was greedy. But he was a nice neighbor to the Nems, and Jen and Jem were glad for the extra money. Big Bill knew that without the Nems, he couldn’t supply all the people in the city with enough eggs. And no matter how high he raised his prices, people paid to get their eggs. If there were any leftovers at the end of the day, he could give them back to the Nems. Pay the Nems a penny per egg, and charge his customers a nickel or a dime or a quarter for the same egg! People grumbled about Big Bill, but what could they do?

One day the Nems visited the city and made some new friends. They explained how easy & fun it was to keep hens and sell the extra eggs to Big Bill. He could never seem to get enough. The Nems’ friends tried it and liked it.  Big Bill noticed he had a few less customers, but he didn’t mind. He still has more than he can keep up with….for now. 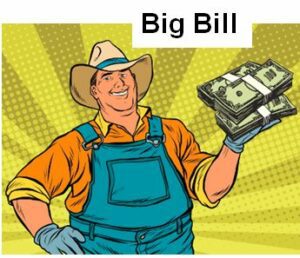 Wouldn’t you rather have Big Bill as your customer? Instead of being his? There is one more character we didn’t introduce:

The Rooster = Synergy Power, the electric booster rooster that helps you produce your own power. We’re not being cocky, just trying to wake you up to the dawn of a new day: Affordable electricity. Cock-a-doodle-DO Solar!   -by Lee Stilwater