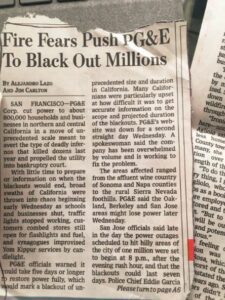 “It’s not because we’re bad at our job or anything. This is for your safety. We’re doing this for you. This has nothing whatsoever to do with our ineptitude.” Ok. “The dog ate my homework” seemed worth a try at the time. So let’s spread the utility giant’s rationale (and there’s plenty to spread) across other markets: What if the pizza guy rang the bell, came into your kitchen, and took food out of your fridge? Or the doctor showed up for a visit and emptied your medicine cabinet. The paramedic arrives at the accident and punches someone. Your landscaper dumps green debris on your lawn? The mechanic swipes your spark plugs? “Well, they wouldn’t. That wouldn’t happen. That couldn’t happen.” Yet, here we are. 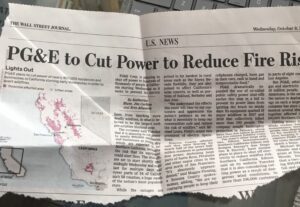 In October, much of California went without power. There wasn’t much notice, & not much explanation. There’s not much justification either, according to many. The ‘reason’ given was that electricity can cause fires, so we better turn off the power. Since car accidents are dangerous, don’t drive anywhere. You could make a mistake and get in trouble at work, so you better call in sick. You can hurt your knee playing ball; best stay on the couch. Not.

Is it just possible that flipping the switch is a ‘we can’t keep up’ ploy? It’s common enough in business. A contractor accepts 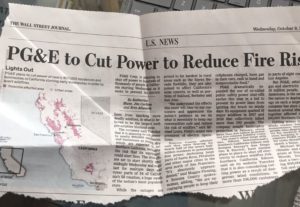 three jobs with enough personnel to do two, and the excuses start flying, getting more creative as the pressure builds. It’s not the best or most ethical way to operate. Even if we’ve been guilty of it, we tend to agree. The worst prevaricator still hates being lied to. But let’s give PG&E the benefit of the doubt. Let’s suppose the shareholders really do have our best interests, comfort, and welfare as high priorities. Let’s keep Cynicism at bay, because he always brings his ugly cousin Despair with him.

Is Turning the Lights Off Safer? 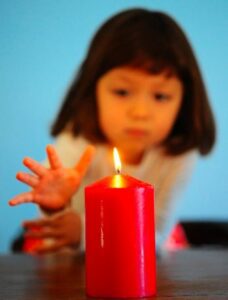 This ‘journalist’ has lived in several different developing (and/or deteriorating) countries for some 8 years over the past 30. Something one typically becomes homesick for early & often is reliable electricity. So the irony of having the power arbitrarily shut off in California would be hysterical…if it was happening to someone else. LIving abroad, one also becomes more grateful for community services such as a fire department, a non-existent luxury in many places. This realizatoin is all the more sobering when one is confronted with a fire, which occasionally I was. Every accidental fire I ever battled was a direct result of not having electricity. Gasoline generators, candles near curtains, melting surge protectors, and other catalysts all had one thing in common: They wouldn’t have been issues if the lights had been on.

PG&E’s solution simply isn’t, in some circuits. So what is?

Remember the Motel 6 guy? His simple, delightful promise stretching back to the 80’s is more relevant now than ever: “We’ll leave the light on for ya.” Leaving the lights on. There’s a thought. Maybe he should run the country’s largest utility. Since that’s unlikey, what?

We rely heavily on electricity. The main provider may or may not be able to provide it. We don’t like ‘maybe’ when it comes to staples.

Solar absorbs the light while taking some of the heat off a beleagured PG&E. Add a battery backup, and you’re no longer relying on an unreliable power source. People used to say, “It’s not that bad.” They don’t say that as much these days. The sun shows up for work every day. Affordable, Reliable. So does Synergy Power, by the way. Shall we?  https://synergypower.com/